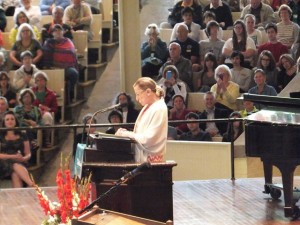 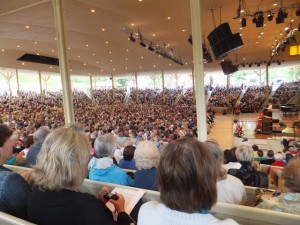 Full house in the Amphitheater! On July 29, 2013, eight members and guests of the Warren Trumbull County Branch traveled to the Chautauqua Institution in southwestern New York. Among the 7,000 plus people at the Amphitheater, were over 100 AAUW members, including those from Warren and several from 2 other branches in Ohio. They were there to attended the morning lecture, presented by Chief Justice Ruth Bader Ginsburg. Justice Ginsburg is quite an opera lover, and presented a very entertaining lecture about the way judges and lawyers have been portrayed in operas. After the lecture, the group had lunch, toured the Presbyterian House, where one of the members was staying that week, walked around the grounds and did some shopping at the Chautauqua Bookstore. Three other members of the branch, Ann Miller, Pat Gojdics and Anne Ellis, also attended but were in a different group.

Check Out How Your Legislators Voted